The support that the recent Therapeutic Goods Amendment Bill received from both policy-makers and from industry is a timely reminder that natural medicine is firmly ingrained in the healthcare landscape.

It presents a significant opportunity for natural medicines that can only be realised by continuing to invest in research.

The body of clinical evidence has continued to grow, helping us understand everything from efficacy to interactions. This journey of discovery will continue – my father used to remind me that the quest for better health is never-ending.

One of the areas where we have a knowledge gap is to understand the reasons people use naturopathy and other complementary medicines, how they make decisions about the medicines and the therapies they use and how practitioners including naturopaths connect and communicate with mainstream hospital and primary care systems.

That’s why my wife, Caroline, and I are proud to partner with BioCeuticals to contribute $1.5 million to ARCCIM to support research into naturopathy and other complementary medicine. ARCCIM is a world-leading critical public health and health services research centre focusing on traditional, complementary and integrative health care that brings together experts in epidemiology and health economics. Its work has received substantial government research funding, including prestigious research fellowships from the National Health and Medical Research Council (NHMRC) and the Australian Research Council (ARC).

Our contribution does not reflect either generosity or goodwill. It is because we have an unswerving and ongoing responsibility to our consumers and to the practitioners who treat them. This research will be Australia-focused and national in scale and independent, since the donation is untied and the centre will design and apply it as it sees fit.

The momentum of evidence-based natural medicine must be more than marketing claims or lip service – it must be underpinned by a strong program of research.

Australian natural healthcare is vibrant and growing, enjoying strong public and practitioner support and I passionately encourage our friends and colleagues across this industry to seek to fulfil their social obligation by investing back into the community who support us.

*This opinion piece was originally published in Nutraingredients

“There is only one way to avoid criticism; do nothing, say nothing, and be nothing.” Aristotle 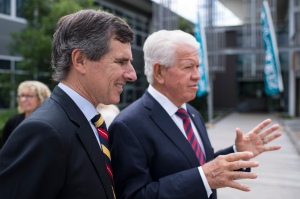 I’ve long taken to heart the negative sentiments of critics of complementary medicine – not understanding how anyone could be so narrow-minded as to exclude an entire approach to healthcare that has benefitted countless people for many generations.

But I stopped caring about them last week.

Last week the Blackmores Institute announced an unencumbered gift to establish the Maurice Blackmore Chair of Integrative Medicine at the Sydney Medical School, University of Sydney, in honour of my late father.​​

Both the University and Blackmores Institute professed the necessity for robust governance to ensure the independence of the research and education that would result from the financial contribution.

Both the University and Blackmores Institute knew that there were growing numbers of Australians embracing complementary medicines and that this was an area that was underrepresented in medical professional education.

Of that, the research funded has, at times, been questionable. Such as a recent NHMRC-funded study claiming the potential harm of vitamin D based on giving rats and mice a dose of vitamin D that would be equivalent to a 60kg human taking 360,000IU of the nutrient daily.

It was not unexpected that the critics professed their ‘concerns’ about the Integrative Medicine Chair, though it was certainly ironic. After years of demanding more research, they were unlikely to commend us for our actions.

They were misguided though in stating that Maurice Blackmore was not worthy of the honour of the name of the Chair claiming he was not an advocate of ‘evidence-based medicine’ (a concept coined in the 1990s – nearly 15 years after he passed away!).

Though the terms ‘evidence-based medicine’ and ‘integrative medicine’ were not used in his time, his life’s work is testament to these principles. His early observations of mineral therapy and his clinical applications of nutritional medicine were the foundation of an approach to health management that is still relevant today.

He dedicated his life to sharing his knowledge and published an extensive collection of observations and clinical notes. They are an interesting read given we now have the benefit of nearly 40 years of scientific exploration: sometimes he got it right…sometimes he didn’t. But he had an enquiring mind and a desire to help people, which is the same motivation that led to this Sydney University gift.

Somewhat prophetically, when I looked today at one of his journals, he notes his concerns that long-term aspirin use could cause serious gastric depletion (right!), he then states that polar bears are claimed to have the lowest mentality of animals which makes it unlikely that fish is a brain food (wrong!). But the most interesting of his reflections on that page was a quote from EH Chopin:

“Scepticism has never founded empires, established principles, or changed the world’s heart.  The great doers in history have always been men of faith.”

It was timely given the commentary of recent days. It’s time for the skeptics and the critics to step off the sideline and engage in furthering healthcare with a focus on prevention and wellbeing. I am proud of the legacy of my father as a pioneer of healthcare, that the Blackmores Group had the courage to contribute to independent research and education, and to play an active role in furthering the health capabilities of our healthcare professionals to the benefit of all Australians.